Sometimes there are those weeks when you just don’t feel like posting. Not that you don’t have some great things to write about, but after a long day at work, a late rent check, and a post-sewing fabric explosion in your living room you just don’t feel like communing with the blogging gods. The little demotivational demons in your head begin crooning, “You don’t reeeeaaaaaly need to post this week, do you?” “Nobody aaaaaaacctually reads this.”

However, it’s precisely that kind of thinking that has brought every single writing project I have every started to a grinding halt. I refuse to give in. And, truth be told, I did have a pretty spectacular Sunday. I couldn’t pick between the places I went, so I’ll make it fast. I wish I had taken pictures at the Game of Thrones/Riverrun Feast Extravaganza, but since I’m still learning how to wield a camera you’ll have to use your imagination. 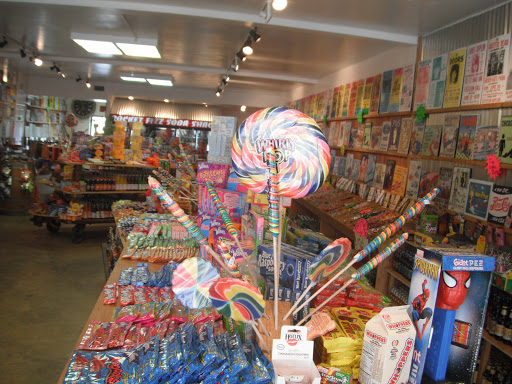 Where did I find it? Wandering up Brand Boulevard looking for something exotic to bring to the Medieval Fantasy Feast (more on that later). I’m surprised that I haven’t wandered into more of these. When I looked at their website I realized they’re in most of the downtown suburbia places I visit. Turns out, it’s a franchise. Smart!

Accolades: Anywhere that specializes in over 30 kinds of root beer gets an A+ in my book.

Cost: Candies are a little on the high side, ranging from $0.29 for a candy stick to $4.99 for some of the more exotic old-timey candies. They also sell tin signs with clever sayings–we bought one to hang in our kitchen- “Beer, it’s what’s for dinner.”

Why its Awesome: I’ll keep it short and sweet (hahaha!), I tripped across this store by accident but I will definitely be back. If you love Big League Chew, Cupcake Bites, Mallow Cups, or anything else sugar filled and retro you will love this store. There are stores located in Pasadena, Glendale and Burbank, to name a few. The taffy is fantastic and the ambiance is fun. The tin signs that line the walls definitely make the place for me. I know my house needs a few more such as, “I Haven’t Had My Coffee Yet, Don’t Make Me Kill You.” and “Fish Naked: Show Off Your Bobbers.” . You can see why Michael loves this store too.

Where did I find it? My friend Sara is an awesome oboist and I’ve seen her in several productions here. It’s been awhile, but I think she played in Fiddler on the Roof and Annie Get Your Gun–but don’t quote me.

Accolades: I’m having trouble finding anything in print, but trust me when I say that these guys do a great job. The theater has one of the largest and most open-minded community fan bases I’ve seen. The actors are supremely talented and the whole thing is community based.

You’ll probably like Avenue Q if you geek out about: Who hasn’t heard about this musical? If you haven’t, think Sesame Street parody with puppet sex and a great soundtrack.

Why It’s Awesome: Even Michael couldn’t keep his anti-theater mentality long with this show. He was laughing from scene one. He even whispered to me after the first few numbers “Are they lip syncing?” For him, that’s a compliment. And no, the talented performers were most definitely not lip syncing. I have to say I enjoyed this version of the show almost as much, if not more than when the girls and I saw it on tour in London for four times the price. We learned from a Q and A afterwards that the crew had spent almost a year putting the puppets together and the entire cast had taken a puppetry workshop to learn how to handle the ‘muppet’ stars of the show. Several actors voiced more than one character, sometimes even singing more than one part in a song. I don’t know how they did it, but it was really, really good. Although the show closed on Sunday, I’m dragging Michael back to see The Music Man when they perform it this summer. As far as community play houses go, this one time and time again has topped my list–go check them out!

Where did I find it? I was a bad person and actually didn’t start Season 1 until less than a week ago. Michael and I had tried reading the books out loud a few months ago but got lost in all the slow moving descriptions and hard to pronounce names for people and places (my chief pet peeves with most fantasy novels.) I began reading the books by myself and got hooked. Now I’m waiting breathlessly for the next episode. Oh pop geek culture, what have you done to me.

Accolades: Nominated for a ton of Emmys, won two–including best supporting actor for Peter Dinklage, who is probably my favorite character in the show.

You’ll probably like Game of Thrones if you geek out about: Fantasy, HBO series with brutality and nudity, a great plot, intricate costumes, subtle characters and good acting.

Why It’s Awesome: I won’t linger too long on why the show is awesome, there are a million blogs shouting its praises and HBO ran the first episode of the second season back to back four times last night to capture all possible US audiences. It was very cool and the hour felt very, very short. I can’t wait for net week. What was even cooler, however, was the feast that our friends Allesandra and Branden threw in honor of the momentous occasion. They recreated some of the dishes mentioned in the book at one of the many feasts: Bacon-wrapped trout, Peas porridge, fresh bread, sweetgrass salad, and to top it all off Branden created a Red Keep cake out of red velvet (not mentioned in the book). I snitched a picture of it from him below. Everything, even the peas porridge, was amazing. I was a little hesitant to try it but it actually tastes a lot like mashed potatoes if mashed potatoes tasted like fluffy peas with a lot of rosemary. Yummy!

Michael and I initially wanted to bring something exotic mentioned in the books (honeyed locusts, anyone?) but I couldn’t find anything clever at the last minute. And really, nothing could hold a candle to that bacon-wrapped trout. Awesome!!!

One thought on “This week of Awesome- April 2nd Eclectic Sunday: Rocketfizz, Avenue Q, and Game of Thrones”