Before I start a new topic, quick picture update from Bel Air. New fixtures! Ugly color will be disguised by pretty wooden trim and lots of merchandise. Ted and Raul did an awesomely fast job of putting them together. Thumbs up for progress as I sit here and wait for Verizon to come fix our phone line. 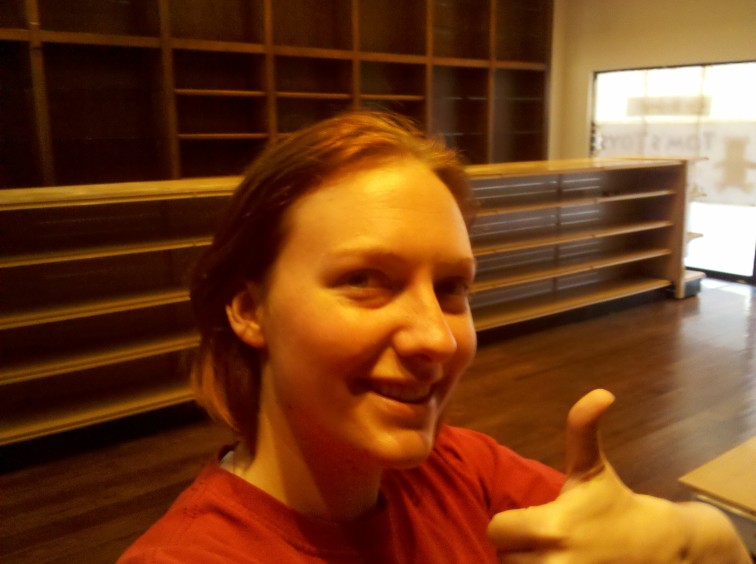 There aren’t many times in your life that you can say you sit at a true crossroads. Sure, there’s always a choice to stay on your current path or veer off into the wild blue yonder and times when a single event changes your life forever whether you like it or not,  but very rarely do you come to a true fork in the road where you are faced with two equal, but very different choices with drastically different outcomes. Michael is (and therefore I am) sitting at such a fork right now. On one hand, an Aquatics Director position at the Antelope Valley YMCA, which looks like this:

On the other hand, an equal pay Aquatics Director position at the Montebello-Commerce YMCA, which looks like this:

Let me say that either way, this is a HUGE win-win for Michael. After years of slaving away as a part-time employee he is now guaranteed by June 30th to have a salary, a title, and, wonders of wonders, a desk!

There are positives and negatives to each position. New program, established program. We’d move, we wouldn’t move. Two bedroom apartment, one bedroom apartment. Friends up there, friends down here. So many pros and cons, none of them clearly outlining one choice over the other. But either choice will drastically change the course of our lives, hopefully for the positive. Isn’t it always more of a puzzle when there’s no clearly wrong answer? I thought I had avoided choices like these when I only applied to one college and chose all my future children’s names in advance. Apparently not. Michael has been fretting about the choice all week and I don’t blame him. We’ve gotten advice from everyone, but it doesn’t make the choice any easier. I know the YMCAs are only an hour and a half away from each other but I think its the principle of the thing that is making us pause and gulp. Michael could be making a job decision that will determine the next ten years or more of our lives. Yeesh! We’ve got until this end of this week to make a choice, I just hope that the choice we make will lead to happiness as well as challenges, stability as well as opportunity, and an increasing confidence that we made the right decision.

Meanwhile, back at the ranch:

I will have to admit, I’ve never been a big fan of feasts at SCA events (my medieval reenactment group). We have many, many wonderful cooks in the kingdom, but I feel they are often stifled and overwhelmed at feast time. Feeding 100+ people is difficult to begin with (anyone who has ever planned a wedding knows this), but trying to feed 100 or more reenactors five courses of historically accurate dishes is a truly Herculean task. Since most of the volunteer cooks and servers do not cook and serve for their day job, dishes that were delicious in the kitchen tend to turn depressingly cold and soggy by the time they hit the tables crammed with hungry guests. There is sadly never enough to go around and, after hours of eating bite-sized courses flavored with questionable spice combinations all I can think about is the big, dripping cheeseburger I promised my poor stomach on the way home. Because of this, I haven’t been to an SCA feast in more than four years. After Saturday, however, I might just have to give them another try–or at least give a free pass to the feasts hosted by Gyldenholt (Orange County). It was delicious.

I was invited to the feast by lucky chance and a gracious friend who happened to win the tournament that day and thus was gently strong-armed into attending the feast by the Barons. They suggested that he could bring a plus one and, since both our significant others couldn’t be at the event that day, I happily agreed to be his rent-a-consort for the feast and make him not the only sweaty, grimy fighter sitting at the head table. Congratulations Nathaniel and thank you for dragging me along.

Apparently Tudor England and I have very similar tastes when it comes to spices and flavors.  In addition everything, including the bread, was homemade by the cooks especially for the feast. Add to that a constant flow of entertainment from wonderful singing groups and harp players and I was thoroughly transported, stomach and soul, to the 14th century court. Dark brown bread, herbed butter, and pickled mushrooms started the table, followed by tasty Venetian cheesy bread (sliced ciabatta bread spread with a sugar, ginger, nutmeg and mace concoction and toasted with a slice of mozzarella cheese on top), sliced carrot salad, roast chicken with pomegranate dipping sauce that was so powerful it made your ears stand on end from the pomegranate-y goodness, creamed cauliflower (which sounds strange, but is absolutely yummy if you have even considered liking cauliflower) and, wonder of wonders, cheesy chicken and herb meatballs. I left with a full stomach, a head full of beautiful music, and a stolen menu so I could look up all the recipes.

Apparently I’ve had the good fortune lately to stumble across many yummy things to eat. Brandon and Michael discovered this one shortly after Brandon moved to central Pasadena. Somehow those two always find the best spot for cheap beer and big sandwiches in town and Luigi Ortega’s definitely fits the bill. The shop is like a fast food sports bar with $3 tap beer happy hour that you order along with your sandwich and fries at a front cash register. The eatery is never full but never empty with the kind of eclectic crowd I like to see. The kitchen is eclectic, serving everything from enchiladas to massive Philly Cheese Steak subs to an exotic menu complete with turtle and alligator tacos. I had a homemade meatball sub that was bigger than my head, slathered in melty cheese, and totally delicious. Michael got a Philly Cheese steak sandwich and Brandon got a massive hoagie complemented by Fat Tire and Blue Moon pints. We finished of the day with imported cannolis. Next time I go back I’m going to try one of their Mexican dishes. Or maybe a turtle sandwich.

Luigi Ortega’s in located on Colorado boulevard, just before Allen if you are coming from the college.

See you next week (or earlier) with a verdict on the job hunt!

4 thoughts on “This week of Awesome–June 18 Crossroads, Tudor Feasts and Philly Cheese Steak”