I’m back from the modern middle ages! I was trying to carve out a time today to write and finally gave up, pushed the enormous pile of work papers off my desk, and just started. Above is a picture of the dining pavilion in our encampment, which consists of about 10-13 household members and guests.

There is nothing quite like going to an SCA war (SCA stands for Society for Creative Anachronism. Members create personas spanning from roughly 500-1400 AD). They happen somewhat frequently all over the country and while they vary in size, location, and style the general concept is always the same: Pack up all your medieval essentials–a canvas pavilion, a bunch of medieval garb, wooden chairs, fire pit, futon mattress with or without an elaborately carved bed, rugs, wall hangings, plenty of booze (something homemade and tasty is always preferred), your armor and weaponry, walls to pitch around your encampment to let everyone else know how awesome you are, ect, ect. Then you kiss your bathroom scale goodbye, swear at the gas prices, and make the trek to lands far away to spend a weekend with 2,000 or more of your geeky friends.

You’d be amazed at the shenanigans 2,000 geeks can get into to over one short weekend… Drinking songs, silly handshakes, pomp, pranks, and wit abound.

I head someone say recently that the SCA is a society of moments. I would have to say that’s the best description I’ve heard yet. Yes, sometimes our battlefield is right next to a parking lot. Yes, some of us wear sunscreen and sunglasses because we are pasty white and don’t want migraines. Yes, some people wear polyester long underwear under their garb when they get cold at night. But when you are walking across the encampment at exactly the right moment and see the sun sinking over the still lake while magnificently dressed lords and ladies gather around a candle-lit supper on a wooden table, or you watch with bated breath as two armies of fifty fighters or more clash into each other with a grinding of metal and throaty shouts or you sip a cordial at an inn full of singing bards and gleeful dancers or you see chivalry acted out in all the forms that have been idealized for centuries you know that you have been transported into a different time and space and that another awesome moment in time has been created.

This weekend was chock full of those moments. I was running the rapier scenarios and I have to say I don’t think I did too bad of a job for running my first war battles. In fact, I think I’d like to do it again sometime. I learned a lot and had a lot of fun. Rapier scenarios (we play with late period three-musketeeresque steel blunted blades) are the most fun scenarios to create because you can make the rules as complicated or as simple as you want them to be. You can run the fights as a last man standing or give each fighter a number of ‘resurrections’ and make the scenarios objective based instead. Each kingdom has a number of warbands who always come out to fight together and I especially like the fighting at Great Western War because we typically have a wide variety of fighters from the West (Northern California), Artemesia (Utah area) and beyond. This is a picture of me in my rapier fighting garb, the thing around my neck is a gorget which protects my throat and collarbone from hard shots: 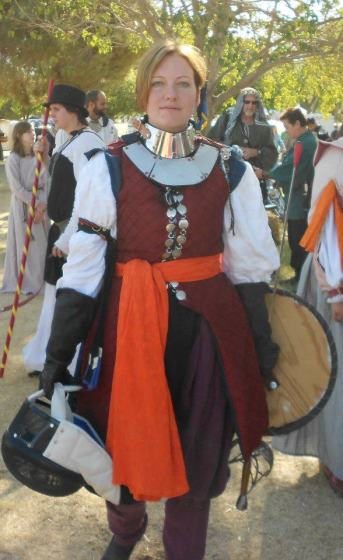 We all ate amazingly over the weekend, mostly thanks to our newest household member, Phillipe (we call him Flea, can’t quite remember why) and his lady Ava who brought 25 pounds of carne asada, gallons of homemade ice cream and two magnificent cobblers. I think all of our cooking at war has gone up a notch over the past few years as we try not to make our humble dinners look shabby next to his. I have promised myself that I will go to the gym this week, but so far that hasn’t happened.

I also had a great time fighting in the Ladies of the Rose Tournament on Sunday and getting a little time to hang out with my lord and husband Bjorn (aka Michael). We met in the SCA and although we have moved way beyond having to go to events to keep our relationship together, I really, really enjoy being able to root for him in tournaments and on the battlefield. He has always been my champion and always will be.

I think that is one of the things that is most valuable about taking this weekend every year to go to war. In real life most of us are not anyone special. We are not movie stars or super models. Many of us SCAers are so geeky we have issues communicating outside of a tunic. But when we are playing medieval for the weekend all of us have something in common. We all have friends who are easy to talk to and interests and fun gossip to talk about. We have a common set of ideals and goals. We know how to make each other laugh and feel appreciated and welcome. Yes, the fact that we are all about medieval history is the reason I play. I want to learn and recreate to the best of my abilities. But I also value the ‘society’ part of our society and I love that, because we are doing this without pay because we enjoy it, each one of us is a crucial part to creating the biggest and most rocking six day party that is Great Western War. There will never be a vacation quite like it. 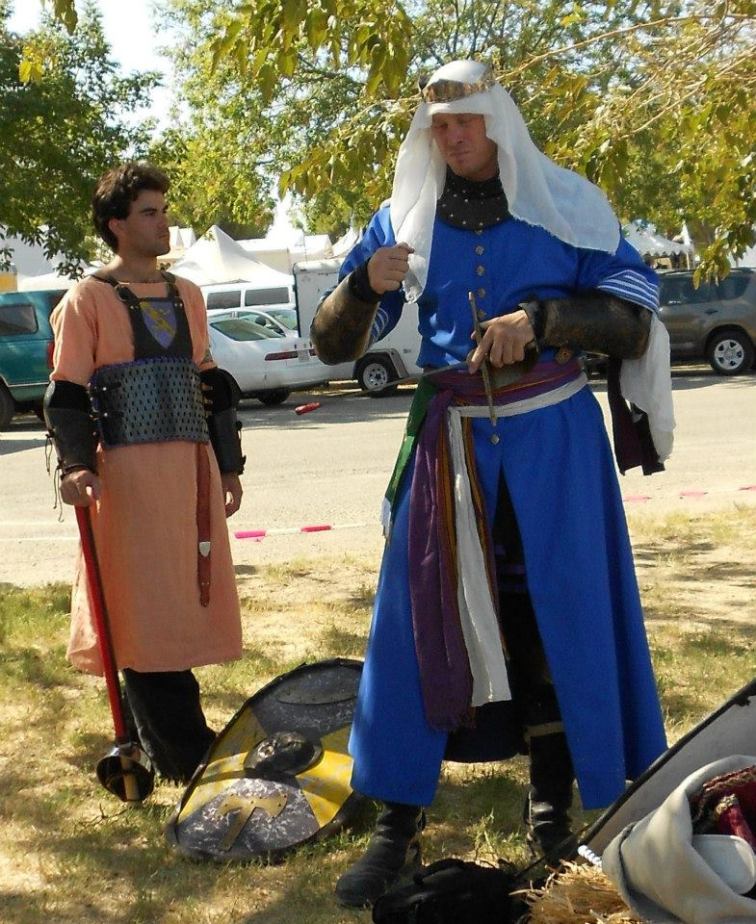 One thought on “Week of October 9th– Great Western War!!”