I made the mistake of looking at the date of my last post before writing this– February 26th!!!! Not cool, Jill, not cool.

Life is just moving too fast these days. Not necessarily in a bad way, more in a ‘how in the world have we wound up here’ way. In the past two months we’ve seen three awesome, healthy babies come into the world (I can’t wait to meet all of you Laura, Aithley, and James) and said goodbye to a grandmother-in-law I wish I had had a chance to get to know better. We’ve had the opportunity to move into a wonderful house with a backyard for Leia, I’ve outgrown all my clothes AND shoes, Michael passed his first University of Phoenix class with a spectacular ‘A’, I now know about all the lovely stages of labor thanks to our new birthing class, and, on top of all of this, Michael and I were able to slip away for an extended weekend a few weeks ago to spend some time together in Northern California.

This was the view from our breakfast picnic spot on the banks of Lake Sisikiyou.

I have always loved Northern California. Starting somewhere in the neighborhood of San Luis Obispo and Paso Robles something magical happens to our Golden State. Its hard not to feel serene and a little bit humbled when driving through rows and rows of towering Redwood trees or standing on the banks of a crystal blue stream that seemed to pop up out of nowhere in the middle of a hike.

I haven’t been to the far northern part of California or southern Oregon since I was a very small child. The most I remember of that trip so many years ago is eating shortbread candy cane cookies my grandmother had packed for me while looking at waterfalls. But even at age four I knew I loved it there.

Michael and I started our trip by a late night drive to Sacramento, staying the night at the Vagabond Inn, the only cheap hotel within walking distance of Old Town Sacramento. The next day we walked the old-west style boardwalks for a while before jumping back into the car and heading for Mount Shasta.

While I was expecting Mount Shasta to be a mountain, I wasn’t expecting it to be, well, and MOUNTAIN. It reminds me of the Lonely Mountain from The Hobbit, towering against a blue sky over the town of Shasta. Pictures, even the nice ones that I’ve seen on puzzles and postcards, don’t do this monolith justice. It had snowed a few days before we arrived, so the mountain was majestically white for our arrival and every hiking trail we went on still had a few pockets of snow here and there along the walk. I also didn’t know that Mount Shasta is a volcano (although I guess I could have guessed that). Although the majority of the landscape is beautiful forest and trees, there are also some very funny-shaped ash cones and other bits of chucked-up earth from thousands of years ago that don’t seem to fit.

We stayed two nights in Shasta at a darling KOA filled with families, campers, and retired people. Because I refused to sleep on the ground while seven months pregnant, we rented a little log-cabin with a space heater, a porch swing, and a not-too-stiff double bed. Michael and I cooked steaks for dinner, played lots of Dominion, our new favorite nerd game, and decided by the end of the trip that we need to find out how to build a log cabin for the woodland estate we will own someday.

Heading out from Shasta, we took a little detour to visit McCloud Falls before continuing north. We decided to try the trail on a whim and I was so glad that we did. There are three falls on the McCloud Falls trail, each one more spectacular than the last: 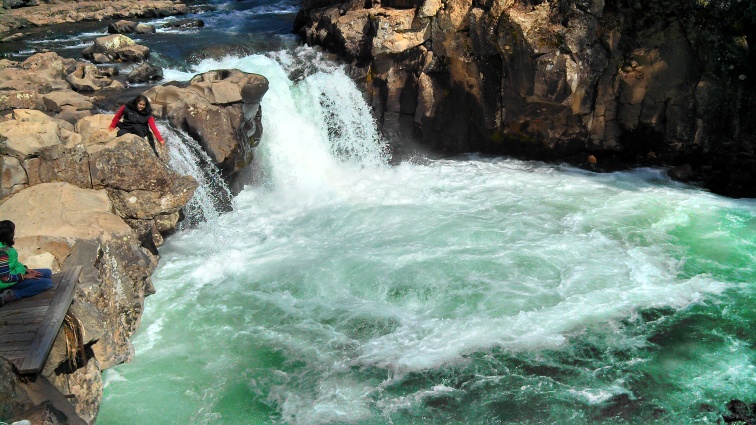 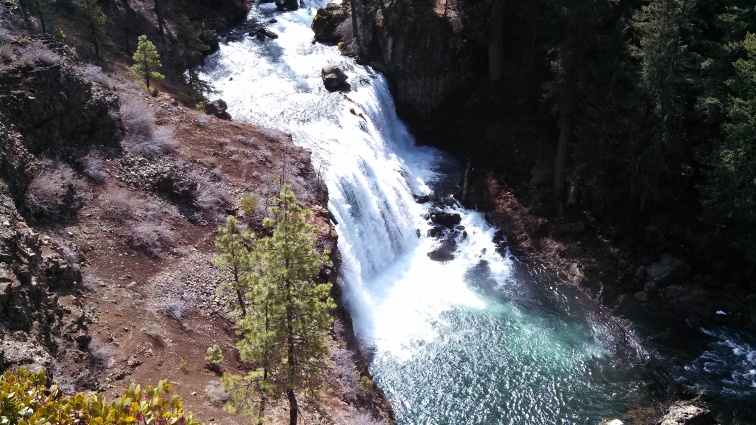 The hike wasn’t too steep, and we decided to dip our feet in the river on the way back down. As expected, it was freeeeeeeeezzzzing!

After Shasta, we crossed into Oregon and spent an awesome evening in Ashland with our friend Avery, who is a student and theatre festival intern at the huge Shakespeare festival held there every year (Although it seems like the festival has expanded beyond the bard to everything from A Streetcar Named Desire to Avery’s play, which hasn’t been finished yet) The town was very cute and had amazing pizza. We dropped into one of Avery’s favorite bars, a little British-style pub, and although I couldn’t drink anything, I let Avery drink some for me and enjoyed the college town atmosphere.

On our way back down into California we decided to stop for a bit at the Oregon Caves. I had found this national park site on a Google search, so I wasn’t quite sure what to expect. It was amazing! The entrance to the caves is set back on a winding highway through the southern Oregon Siskiyou Mountains. The whole area is wooded, with the cave entrance opening suddenly along an innocuous-looking trail. The main lodge sells tour tickets, $8.50 for adults, and has lovely comfy seats you can nap in while waiting for your tour. The guides are very funny, have lots of nerdy facts up their sleeve, and make the tour enjoyable for both kids and adults.  We weren’t able to go in the main cave entrance because it was still bat hibernation season, but we went down a sink-hole entrance and were still able to see most of the caves. We still had to watch very carefully for bats but luckily we didn’t see any. Apparently if you wake a sleeping bat before it is finished hibernating it goes looking for food and, not able to find any, starves to death! I never knew waking up from a nap too early was hazardous for your health! Michael made me take careful note of this fact.

Apparently marble caves, like the Oregon Caves, are very rare, making up only 5% of all the caves in the world. The Oregon Caves are also rare in that they travel up the mountain instead of down so when you leave the cave exit you are actually farther up the mountain than the entrance you started in. It was very strange to try and visualize where we were in relation to the mountain when standing inside the cave, I think most people assume that being in a cave means that you are lower than ground level.

The caves had pretty much everything a cave junkie could ask for- stalactites, stalagmites, columns, and even cave bacon (ribbons of marble that look like juicy, amazing bacon)! The caves even had a fault line running through the ceiling of one of the main caves and if you looked closely you could see where one side of the cave had shifted after an earthquake many, many years ago.

The room with the fault, although I couldn’t get a clear picture of the line.

After visiting the caves, we trundled our way down the coast, spending a few nights in Arcata and seeing many, many redwoods before finally having a late dinner outside of San Francisco and spending most of the night driving home.

After taking this trip I’ve realized there are some things in life that require you to hit a pause button on everything else that is going on in your hectic schedule and just do. So many times I get so caught up in my day-to-day frantic life that I put the label “maybe someday” on way too many things. Life isn’t about maybe someday. You never know when a day like today will come again. I know that my life will be getting even busier soon with Ella due just around the corner, but because we had a chance to take this trip I feel more excited about the prospect. I can’t wait for her to be old enough to enjoy everything I enjoyed about Northern California!

One thought on “Mount Shasta Adventure”